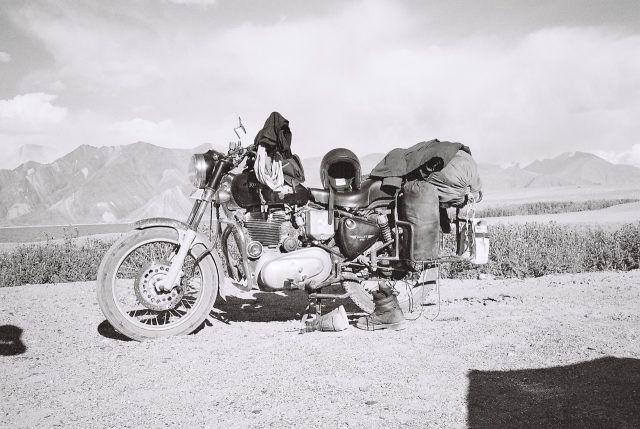 My intro here is simple. Friend, photographer and art curator Matt Rabbidge (also hubby to the delectable @followthevista) went on a motorcycle road trip through remote India with his two brothers. Swags, moto's and the bond of brotherhood was all that was needed to kickstart this month long adventure. It sounded so free, so wild and brave that I wanted to hear more, see more.

Was it a coincidence that all three of them were reaching a major milestone in their lives? What did they see? Where did they stay? Was it safe? Did they fight? Did it change them? ......ahhhh you get the picture, literally.

First let’s set the scene… how and where did the idea for this journey come about? Was anyone drunk when this came idea came to light?

I'd actually done the trip a few years earlier with one of my brothers, and two good friends. They'd ridden around Tasmania on push bikes purchased from the Hobart tip shop the year prior, it sounded like a great adventure so we conjured up the plan to take on India.

I'd planned on doing this second trip with my wife Julia, I had this yearning to show her what I'd seen, and what had me wanting to get back there so badly. Then we fell pregnant and our local doctor didn't seem too impressed when we suggested doing a journey on motorbike, to a remote part of North India for a month. So, my two brothers Laughlan and Strath had the call up.

Before you jumped on the plane, how well did the Rabbidge brothers get along? You’re the oldest right?

I'm the eldest of the brothers three. We're super tight knit - so a trip like this didn't ever really bring issues. The trip saw a few important life transitions for the three of us too, my wife Jules and I were expecting our first bub, Lock had just quit a full time job to start his own Landscape Architecture firm and Strath had bought a timber sailboat and was about to move to Tasmania for work.

Why choose India, what set this place apart from the rest of the world? Did you have any connection to the place prior to this trip?

You've gotta go to know! India truly is an attack on all the senses. It's confronting at times but also one of the most beautiful places in the world.

This trip was a little less planned that our previous visits. Basically, we had a month to head as far up into the Himalayas as we could and then back to our starting point.

We were in and out of Delhi's hustle and bustle as quickly as we could be - from there it was north to Rishikesh before we headed loosely north west across as many remote mountain passes and back roads as we could en route to Dharamsala. We had a few days in a small village halfway between the two where my younger brother Strath had spend six months doing a pottery course a few years earlier.

What’s the story with the motorbikes?

Ha! Beautiful and unreliable. We rode the classic British designed, Indian made Royal Enfields - basically, they're India's go-to for shiny 'business men', baby boomer Americans on motorcycle pilgrimage and young Israeli travelers. The bikes are also pretty simple so we were able to fix any minor mechanical issues ourselves.

All that freedom and space must have been incredible, were there any crazy moments out there? Why do I vaguely feel like I saw a picture of your brother nude?

We had plenty of time in the hills where you'd see only sherpas and their herds of sheep and goats or the odd army convoy barreling past in trucks that'd take up the whole road.

That meant plenty of time to act the fool too. The nude shot was actually our pal Chris on the first trip, he thought it'd be a great idea to send his girlfriend a photo riding around a mountain bend in nothing but boots and crash helmet, I thought it'd be a great idea to take off with his clothes and ride another hour down the mountain to the next town. He wasn't all that impressed.

Since you were often so remote and off the grid, were there any moments when your gut feeling said ‘this isn’t right’? Or that your intuition told you it’s time to move on?

A few times actually. On the way home we blindly rode into a district in the midst of some wild chaos and riots. A few hundred people were protesting against the government's job allocations for different castes, they'd blocked major highways, cut the main water supplies to Delhi and swore that any car, truck or bus trying to pass through their region would be set on fire. It wasn't till we rode upon the first burning road block that it set in just how bad the situation was, so turned round and sped back to the safest town until things smoothed over.  A day later the army stepped in and cleared things up pretty quickly, when we finally did ride through the region there were smouldering cars and buses all over the place!

Other than that, we were lucky the bikes held up mechanically most of the time - it was actually the routes we chose that normally had us in trouble. The first time we rode bikes in India we chose a fairly well traveled path, the roads were good quality and we'd see other riders at least every hour or two - this trip however, we took every hidden back road and dog legged mountain crossing we could. Our trip timing meant we were chasing the tail end of winter and naturally in the Himalayan foothills, this meant plenty of snow and mud. A few times we'd be stuck on a mountain pass with close to no daylight left and scrambling for somewhere to sleep.

What did a typical day look like for you guys?

Up at sunrise, chai. Pack our gear, warm up the bikes, Chai. Get on the road and enjoy the cool mountain air without the real daytime traffic. Stop for breakfast with an obligatory Chai. Some more riding till we'd find an inviting looking chai stop. Ride into the afternoon, grab lunch - with chai. And then start thinking about how far we'd need to ride for reasonable accommodation (over chai of course). Ride a little more, unpack the bikes, walk around the village or town we'd decided to stop in with chai in hand. Grab dinner with a godfather beer (perhaps the worst tasting, but only available beer in many mountain towns), wrap it all up with a chai and bed. It's fair to say we'd drink at least 10-15 chais every day we were in India. That sickly sweet tea would keep us alert for hours!

What were the best tools needed for a trip like this? What did you wish you had, that you didn’t have access to?

Waterproof bags (for the river crossings and mountain snow passes), Zip ties, gaffa tape and a multi tool. The company we'd hired bikes from had also provided spare tyre tubes, spark plugs and cables that all came in handy at some point.

You seemed to have traveled really light which seems so liberating. What was on your back?

So great! Everything we took had to be unpacked on the bikes each day and taken inside so it was smart to take as little as possible. Apart from camera gear and some tools I literally had the clothes on my back plus a handful of extras. I'd spoken to Australian outerware company Drizabone prior to the trip, and we'd agreed to pack a few of their wares and coats in return for some imagery. Fair to say by the end of it all we were wearing dust and oil covered everything...

The poverty, the beauty, the people, the spirituality surely must resonate strongly within you. How did this trip change or affect you?

Indeed, the place definitely gives you perspective. India has this indescribable magic, for me it's strongest in the hilly northern regions. I have a real want to share it with my Julia and Delilah soon.

What effect did the trip have on your connection to your brothers? Did you discover something about them or yourself that you didn’t know before?

Ah we're tighter now than ever. A trip like that gives plenty of time for candid conversation about our love and aspiration, fears and reservations. Any discussion seems to come from this deeper respect and understanding of each other too - I'd love to do something similar every ten years with the boys, just to put things in perspective.

Did you have any punch ups? Was there an alpha in the pack?

Not even close! I guess I played the alpha card, but it was almost always to direct a photo!

Let's just say you can probably ride a little quicker when it's a trip with the brothers.

How did the trip effect your work?

Creatively, a trip like that has a huge influence. I enjoy taking photos that help to tell a greater story. Portraits of locals, landscapes and of course the three of us interacting with it all. I went there inspired, I came home inspired.

What was the most important thing that you took from this trip that you will never forget?

There are three MUST haves when you're riding a motorbike in India. A good helmet, good brakes and good luck!